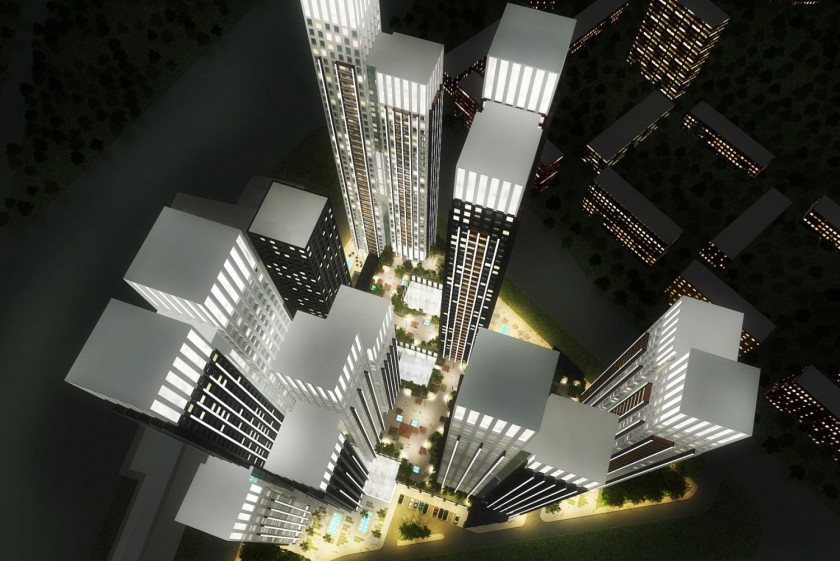 Dyer has been commissioned in the past to deliver several large-scale projects including OZ Mall, Queen Margaret University and Campus, or TAU Gallery Shopping and Entertainment Centre. Many of our latest projects now include not only large scale but also high-rise developments as well. We have invested in developing new company standards using the experience of our previous projects to excel in innovative technologies and optimal planning solutions to deliver the best possible value for the highly competitive residential market.

As well as basing the philosophy on the work of Malevich, we feel that there should be a material difference in the style and architectural character of the facades of the new building. To create uniqueness, and a contrast to the glazed facades of the current Moscow City towers, we propose to use a more fundamental architectural style inspired by the classic American tower architecture from the early 20th Century.

The vertical proportions of the tower require delicate sculpting, a hierarchy of materials and colors. To achieve the vertical and horizontal separation of forms we created various segments on the facades. The combination of these elements allowed us to create an exciting, dynamic massing, even though the basic geometry of the development is a fairly simple composition of six square tower blocks.

All the towers’ massing respect the height and scale of their neighbors and the facades are characterized by deep bay windows in the white segment, individual square units with pop-out glass boxes in the beige and elegant simple grand openings in the top pieces, which take full advantage of the views from the site and broaden the elegant living spaces within. The carefully optimized planning of floor plans generated apartments with a wide variety of orientations and plan sizes according to the required apartment mix. Within each apartment, the internal organization is kept fluid in order to facilitate individual planning options.

We are currently working on several high-rise projects. One of them is in pre-planning approval stage in Moscow, with nine residential towers, heights varying between 130m and 150m offering more than 3300 apartments. Construction will commence in mid 2017.